I have a few points of frustration with the common modern web search engines. For one, they tend to get gamed by content mill sites that specialise in Search Engine Optimisation (SEO). These very sites tend to be the ones that don't respect the reader, hammering them with nagging pop-ups, adverts, trackers and other distractions. I'm not even sure that many of these sites are actually written by a thoughtful human as opposed to being chucked together in a rush, or perhaps even by machine.

It's not that sites authored by individual people have gone away. If you know where to look (which is difficult), they still exist and I much prefer those. I suppose those people don't care about chasing all the latest SEO tricks and so they fall to the bottom of the results. That's understandable; it's enough effort to put a site together in the first place, why should they have to be bothered with the SEO games as well?

I thought to myself something along the lines of 'it's about time that someone makes a search engine which is specifically targeted at small websites and doesn't give you any rubbish'. Unfortunately, I then had to take personal responsibility for that statement and start such a project myself. :-)

I call it QuickPeep — 'quick' because it should be fast to get to desirable content and 'peep' because 'peep' means 'a quick look'. 'Peep' also describes one of the sounds made by some birds, so it's a perfect excuse to have a cute bird on the logo.

A few guiding principles of the project are:

QuickPeep's pipeline and what it looks like to operate and use🔗

To start this project off, I assembled a collection of seeds — URLs that point to pages that I want in my search engine. Each seed implicitly vouches for (allows the crawling of) the same domain (or, in some cases, only some URL prefixes). I also came up with a handful of weeds — these are the opposite of seeds and correspond to URLs that we don't care about tracking, either because the site is too big to be practically indexable or the site doesn't belong in our focussed search engine.

Early on, I added a seed collection webpage to QuickPeep's web interface so that I could easily enter seeds (giving them tags) and even collect a few from friends and colleagues (thanks folks!). I only have about forty right now, but it's still enough to be interesting.

Obviously, we need to get the content of interesting webpages into our search index so we can answer search queries. The first half of this — retrieving content from webpages — is what the QuickPeep 'raker' does.

The raker maintains its state as a libMDBX database and emits Zstd-compressed 'rake packs' which contain the page contents, references, site icons and errors.

The operator can then start the raker itself (qp-raker). The raker splits off into separate tasks and will shut down when there is no more work to be done.

Each task selects a rakeable domain at random from the database and then processes queue items for that domain. A queue item is an instruction to download a URL, perhaps with an 'intent' for that URL (which determines what kind of document we're expecting). The raker is capable of understanding HTML webpages, RSS and Atom feeds and XML Sitemaps. Common image formats are also supported, but only if the raker is downloading a site's icon (becoming an image search engine is outside the scope of this project).

If we run into trouble whilst downloading from a domain, the raker can either generate a 'rejection' entry for that URL or, for temporary failures, we can back off from that domain until a later time.

For feeds, sitemaps and webpages, the raker extracts references to other URLs. These are emitted in the 'references' rake pack and:

For HTML webpages, the raker applies a few steps of pre-processing:

The document is then emitted into the 'pages' rake pack.

For icons, we decode the image, convert it to a lossy WebP with an unreasonably-low quality value (5%) and then emit it into the 'icons' pack. I'm sure I could afford to be more generous with the icons, but I've been impressed enough with the quality for the tiny size that I haven't bothered to.

The rake packs are compressed with Zstd (using a high compression level). Keeping the types of documents separated into different rake packs is good for two reasons; it improves the compression ratio as e.g. the pages rake pack contains mostly human-language text and doesn't have WebP icons randomly interspersed. The separation also means that you don't have to download all the rake packs if you don't need them; someone operating an indexer likely doesn't care about the references rake pack, but someone operating a raker may do if they want to rebuild their raker's state without reraking everything.

The raker can export Prometheus-compatible (or BARE Metrics-compatible, though I prefer Prometheus & Grafana for this situation) metrics. This gives you a way to see that it's making progress, as well as an idea of the sizes of various database tables (both in numbers of rows and in bytes/disk usage). 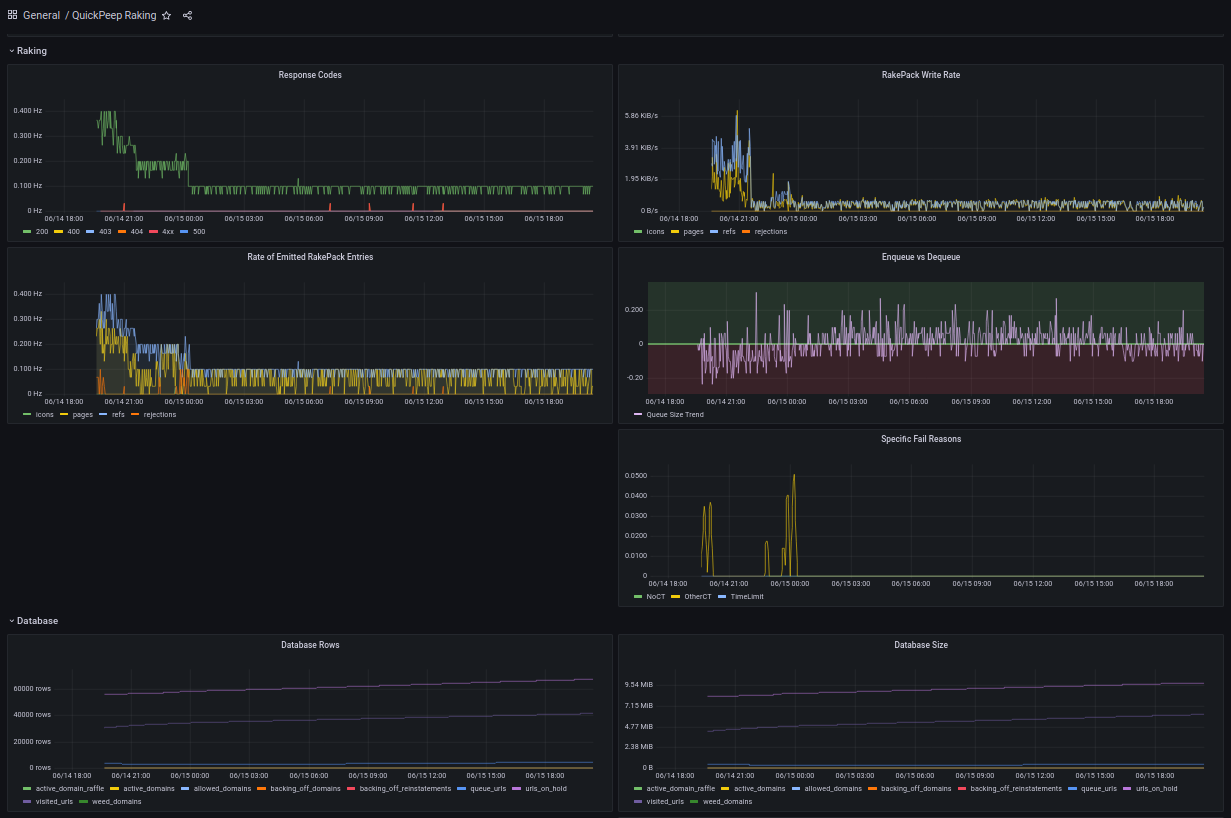 Figure: Part of a Grafana Dashboard for QuickPeep Raker. This is showing the slowest part of raking: the end, where only a couple of sites have not been finished.

A quick aside about anti-features🔗

The raker identifies and tags pages with 'anti-features'2. These are aspects of a page or its site which may be undesirable for a potential reader.

For example, the presence of pop-ups (e.g. cookies, e-mail subscription nags, etc) or adverts may be reasons to avoid a site.

The raker also tries to identify sites that are sitting behind CloudFlare. This is because sites behind CloudFlare are often unbearable or even totally unusable for users of Tor; many sites impose at least a series of CAPTCHAs but some deny access to the content outright.
This can be extremely frustrating and seems to fit into the 'disrespectful to the reader' category.
Tor users should be able to use QuickPeep and exclude or down-rank these results if desired, to avoid wasting their time.

The inspiration for the term 'anti-features' comes from F-Droid, which applies this to Android applications.

If someone wants to operate a search engine, they first need to set up an index.

QuickPeep is intended to support multiple index/search backends; currently Tantivy (an embedded search engine) is implemented but I'm interested in trying MeiliSearch (a search engine server) to see how it compares.

The operator configures their index of choice (Tantivy is easy as there's no need to set up a separate server).
The operator can then download and import the rake packs, either from their own raker or from a public repository of rake packs (e.g. mine! — once things are a bit more stable).
The operator uses qp-indexer to index the entries from the rake pack (this also imports icons into a small key-value store so that the web interface can find them).
There is a command-line tool, qp-index-search, to search the index, which can show that things are working.

Figure: A search for 'bee counting' using qp-index-search. This tool is also interesting because it shows the relevance score of each result.

The quickpeep binary serves a web frontend to the index, offering a simple text box and button-based interface for performing searches.
The layout is quite minimal, which I like here (but it currently looks rubbish on light mode, I'm afraid. If your browser doesn't advertise a preference for dark mode, be warned :-)).

Right now, I just pass my query in to Tantivy fairly directly and don't try anything too intelligent or sophisticated to refine the results. Luckily, Tantivy also supports common search operators (such as +word, -word, "multiple word phrase", etc), so we get these 'for free'. I also take Tantivy's excerpts/snippets directly.

There is no PageRank algorithm or anything, it's all just plain full-text search ranking.

A quick play with the search engine reveals that it doesn't feel like it's giving me as much 'relevance' as other search engines do. I imagine some refinement could go a long way to improving this.

That said, I've also compared a few queries to DuckDuckGo and some of them aren't really any different. Naturally, only having about forty sites in the index rather than ...millions(?) is bound to mean that some queries struggle to find much relevance, though.

I've also found some interesting articles through QuickPeep and I've enjoyed reading them, so it's not that much of a flop!

Once I can think of how I can improve this, I'll give it a go. Trying MeiliSearch may be interesting as a point of comparison and I may get some ideas along the way.

Figure: A search for 'CRDT' in QuickPeep's web frontend 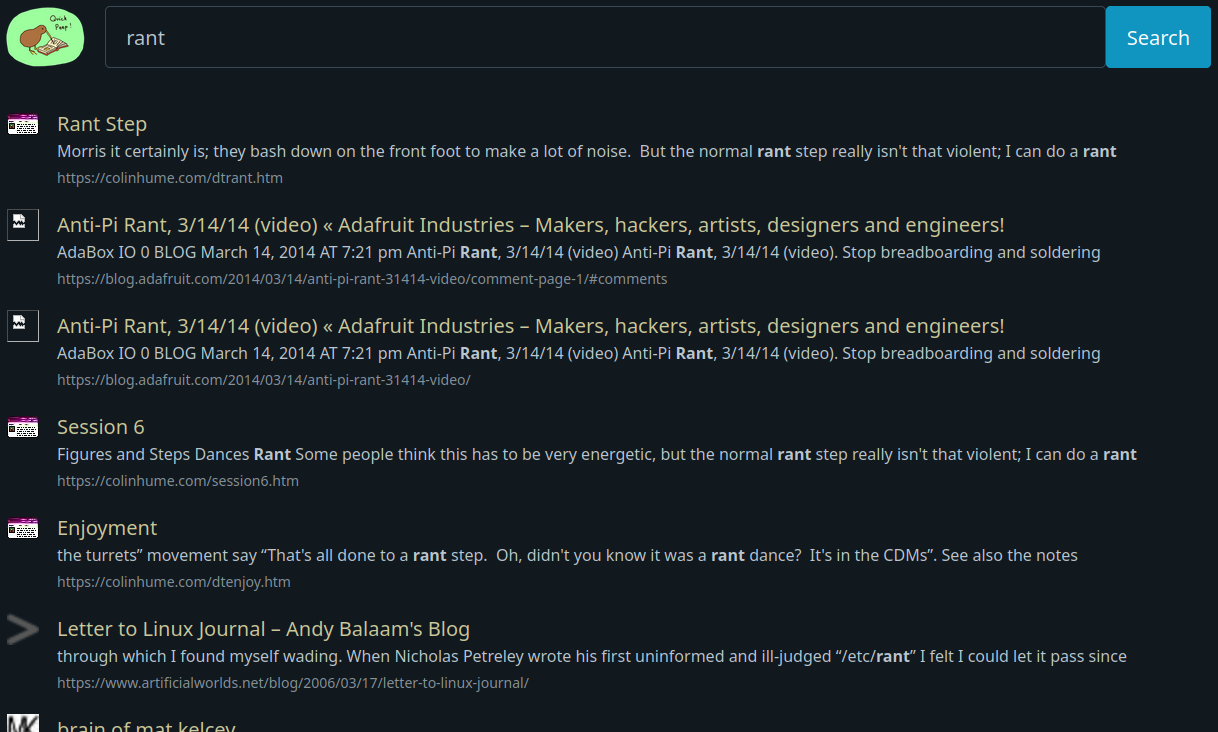 Figure: A search for 'rant' in QuickPeep's web frontend

Ideally I should try and get at least thousands of sites into the index before thinking too much about this, but again, disk usage is an obvious concern when operating a search index. How much space am I using for these ~forty sites?

The size of the Tantivy index seems to be the most worrying, especially since you can't really delete it if you still want to search for things!
It may be worth adding Zstd support to Tantivy's document store (currently it uses LZ4, which is fast but has a much lower compression ratio) and using it to compress entries. Training and using a Zstd dictionary should give us a good compression ratio. Decompression will be slower, of course, but it's still likely good enough.

Alternatively, I believe it's possible to not store document text itself in Tantivy's datastore.

The biggest files in Tantivy's index seem to be .pos and .idx files, so I'm not sure improvements in the document store are going to buy much anyway. I note that zstd can cut one of the .idx files down by 50% and one of the .pos files down by 20%. Perhaps it's worth using a compressed filesystem?

I presume the large .pos files are indices of the positions of all the terms in the document (primarily useful for "multiple word phrase" search terms, as far as I know).
I suppose those could be turned off altogether at the cost of making "multiple word phrase" queries slower (as they'd have to find the positions in the document itself).
According to Paul Masurel's blog post about Tantivy's indexing (which I just submitted as a QuickPeep seed :^)), it should be possible to make the index itself smaller than the document, if term positions are disabled.

...but open! QuickPeep is open-source: quickpeep. My collection of seeds and weeds is open data: quickpeep_seeds.
If you'd like to give it a try, you can visit https://quickpeep.net, but don't get your hopes up :-)!

Aside: other uses for the 'references' rake packs🔗

When a lot of sites have been crawled, it'd be fun to load the 'references' rake packs into some kind of graph database and be able to answer queries like 'which pages refer to my page'.
Reverse references like this could be quite interesting for finding extensions or different points of view to an article you are already aware of.
(This would be gamed for SEO purposes in a heartbeat on a conventional search engine!)

Because these rake packs will be available for download, it should be quite possible for someone to do this if they like.

QuickPeep is built on top of many great quality, open-source libraries.
Many thanks to all their authors for putting their work out into the open for fools like me to enjoy!